If you haven't heard/already seen it, Spacejacker has put up a set of solo small scale skirmish rules called Gunstorm, over on Tiny Solitary Soldiers. I believe they are technically still in Beta, but they are certainly playable.

It's been awhile since I broke out my 15mm sci-fi minis. This was the excuse I was waiting for.

For the first game, I sent a four-figure squad of Control Battalion against a 5 figure squad from the Resistance in a Extraction Scenario: both sides had the objective to get Master Shake off their side of the table.

The Control Battalion had fewer members because they had better armor. Both sides were led by a figure with a rating of Veteran, the rest were Regular. I did not use Stunts. 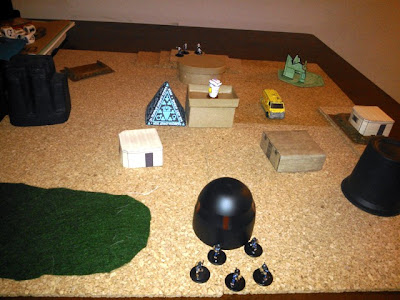 Between the number of times I drew Fortune, which were won by Control, and Move Enemy, Control moved unimpeded to within a move of Master Shake's HQ: 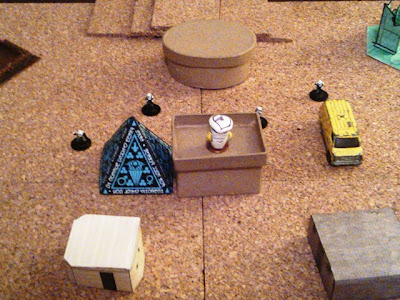 While my squad stood around scratching their butts:

Then the momentum took a turn for the better: 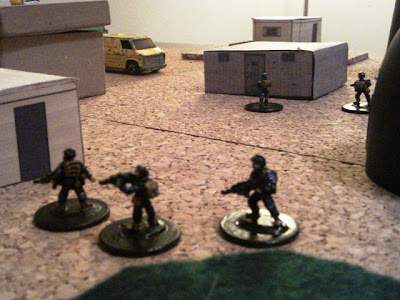 We got there first! 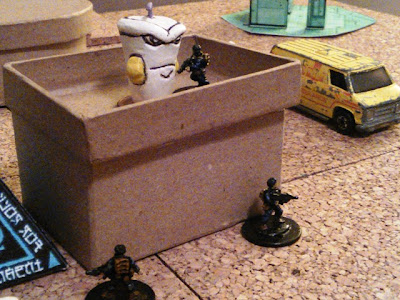 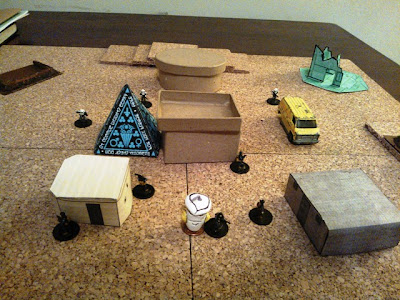 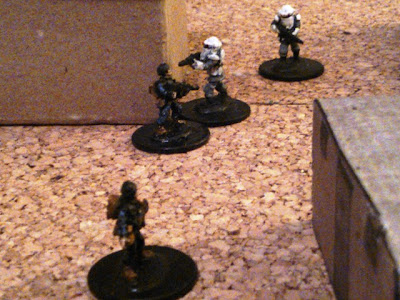 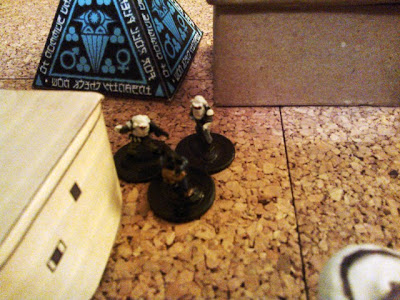 And it went down hill from there.

In the end, Control had Master Shake, and my squad was wiped out - mostly due to bleed outs.

I enjoyed the game enough that I decided to play a quick game today on a break (hence the less than evocative setup).

1 giant rampaging robot vs one squad

The squad started the game disembarked from their Labtec AFV. The robot is visible in the distance. 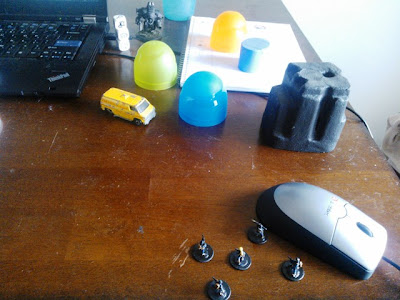 The phases went in my favor this time and we got up close fast before it had a chance to use its cannon: 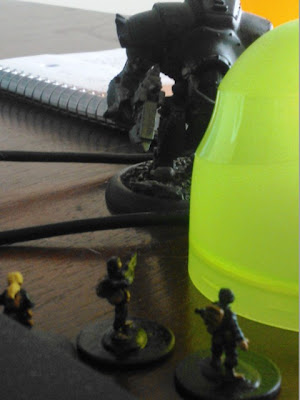 I took a gamble upon winning a Fortune phase and moved out to get a combined shot at the robot (it had an 8+ armor rating and there was no way I would hit it without combining.) and crossed my fingers I wouldn't pull the Enemy Shoots phase next.

As luck would have it, I drew the Player Shoots phase and hit!

The robot rolled his Guts Save. He needed a 2 or higher: 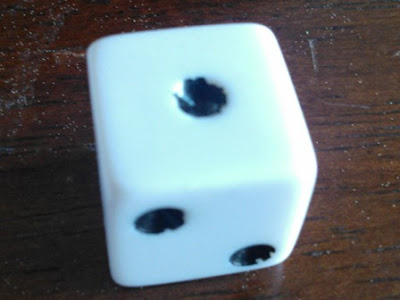 Yeah! Take that Warmachine! I then drew the wound chip and drew a clear, which functions as the black wound markers since I don't have enough black stones, i.e. Out! 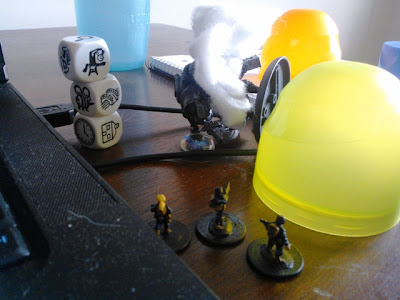 All in all a fun little system. I think the hardest part for me was figuring out what to use for phase chips and wound markers.

As I said, I think technically this is a Beta. There are some editing issues as of yet - primarily I couldn't find the base movement rate in v1.1 but I had downloaded v1.0 which showed it as 4", so that's what I used.

Also, there's no SMG on the ranged weapons table - not that it mattered in my games, and it's easy to extrapolate. Similarly, there are no vehicle rules, but again,extrapolating them shouldn't be difficult.

One rule I wasn't clear on was whether a model had to test for bleeding out if their side won the Fortune phase. The rules say: "Additionally, at the start of any of it's [sic] side's Phases, a model with Bleeder counters must make an unmodified Guts save for each counter."

As I see it, neither the Fortune phase nor the Exchange Fire phase belong to either side, but that may not be the intent.

Much like FUBAR or USE ME, you can probably port these to just about any setting/genre.

The solo enemy control seems to work given the types of scenarios this is designed for: small numbers of figures with specific objectives engaged in gun fights.

In any case, they're free, so you can't beat the price. Download them and have a look if you haven't already!