Murder-Hoboing in Stonehell for Fun and Profit 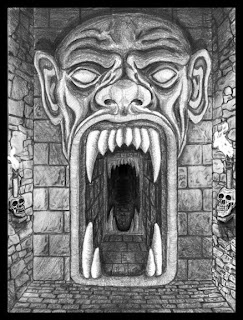 Last night, I joined my 2nd session of the Thursday night sorties into Stonehell over on Google Hangouts.

Before we went in, I picked up a vial of holy water and some more darts - they don't do much damage, but they cost 5sp compared to throwing 5gp daggers all over the place.

We decided to return to the section we had found last time - which involved having to pass through a room which I guess is haunted. It isn't clear to me how often the ghostly apparition appears, but it seems to frighten one person, disappears, and then the rest can pass. Except no one wanted to go first.

That's right. My shuffling 1st level -old-man-2 hp-AC 8- magic-user "raced" through the room and made it unscathed to the other side. I would have taunted the "brave" warriors in the group, but such things can have negative consequences when you need them to stand between you and an undead horde.

We continued to explore the various crypts and, not unexpectedly, our first encounter was a ghoul. I bravely ran up to throw my holy water vial. Rolled an 8. And basically threw away 25gp. Urg!

I made up for it a short time later during an attack from a number of zombies by running up and dropping an already damaged zombie with a precisely targeted slash of my silver dagger.

Zorkon, the Zombie-slayer, has a nice ring to it, don't you think?

My general curiosity about Stonehell came in handy - I opted to search a room that seemed of little interest, and managed to find a treasure map (a treasure some 30 miles away and unlikely to be pursued anytime soon) and a secret door. The latter led to a scary encounter with a ton of skeletons, scattered around a giant snake skeleton (which fortunately was inanimate).

Zorkon bravely stayed out of it, but I also saw shades of the children of the hydra's teeth, from the Harryhausen Jason and the Argonauts movie, and so afterwards, pried the serpent's fang from its skull to try and sell back in town.

Speaking of, we did make it back (minus one cleric, the 1st casualty for the group), thanks to the power of fire and oil. This is why low-level party's tend to be pyromaniacs; the tactic is rewarded.

I had to sign off once we got back to town, and so next time, I'll make an effort to find a market for that fang and find out if they'd have any interest in any of the rest of the teeth/bones.

So, Zorkon has made it through two delves into Stonehell and is about 1/4 of the way to 2nd level.