I've been playing Mission 1 from Nuts! 2.0 a lot. Like 10 or 20x in the past week. I find it surprisingly fun and challenging, which probably says more about my poor use of tactics than anything else.

Anyway, I wanted to do a somewhat bigger game and decided to try a mission, starting with just one squad on the table. I rolled up my American infantry squad and rolled perimeter defense. My objective: prevent the Germans from exiting off my board edge. Enemy Activity Level (EAL) of 4, Support level of 3.

For those unfamiliar with the THW method, the table is broken down into 9 sections, numbered Left to Right, Top to Bottom:

I started the game with my BAR team  in section 7 and my rifle team in section 9.

3 PEFs (possible enemy force) markers started out on the table in 2, 3 and 5. One resolved to nothing early on, and then the Germans got reinforcements: an entire section - 9 men that entered in section 3.

The 2nd PEF also resolved to nothing.

Feeling smug, I moved my BAR team from 7 to join  the rest of the squad in 9.

During this time we made contact with the German reinforcement section, which went in my favor. It was in the bag.

And then I resolved the final PEF:

"Are you KIDDING ME?" 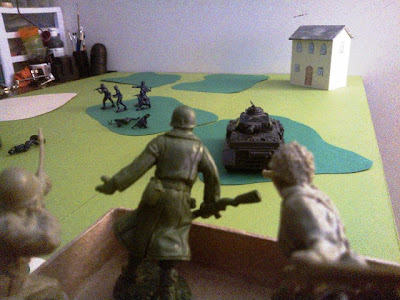 Lacking any anti-tank weapons other than satchel charges, and rolling some bad In Sight checks, led to the tank's co-ax MG taking out the corporal and forcing the 2 privates on the roof to take Man Down tests, which they failed miserably - they Hunkered Down with virtually no hope of being rallied.

Fast forward a smidge and the Sargent (Rep 5) and a Rifleman (Rep 4) who were hiding behind the stone wall, decided to go for Who Wants to Be a Hero? and passed their Wanting to Charge.

Over the Wall ...
In hindsight, that was a terrible idea.

I should have had them sneak through the house and out the back - maybe taking the time to rally the guys on the roof and then get out of there.

Instead, the tank crew passed the In Sight and opened fire again with the co-ax. 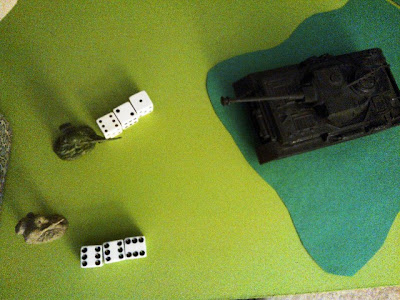 With the expected results: 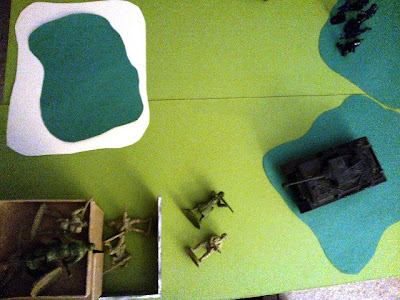 I called the game here as a German victory.