Thinking Out Loud : More on a WW2 Wargame Campaign

As I continue to seek out ideas on running a WWII-based wargame campaign, I've made one firm decision (small victories, folks): one stand = one platoon.

I don't want to worry what 1st squad, 2nd platoon is doing. I assume they're doing what they are supposed to be doing. I do want to make sure 1st platoon, A company is where it needs to be.

This lines up with the One Hour Wargame platoon basing and what I've been using for most of my recent Morschauser games. Blitzkrieg Commander supports this basing, and so does ‘Tactical Combat’ WWII rules, of which Stu Rat reminded me. The latter two have much more WWII feel, but Morschauser is a good bit of toy-soldier fun that is hard to resist. The other real contender is Portable Wargames: Modern or perhaps the Big Battles version, which as they are on grids, feel like a blend of toy-soldiers and hex-and-counter wargaming.

I am leaning heavily towards a Morschauser strategic map campaign. What can I say? I really want to use those blocks for map movement. The benefit of Morschauser's system is that no record keeping is needed, at least for the losing force. In Morschauser terms, and as I'm imagining it, each command on the map will consist of a battalion, or some part thereof, on the table.

How I generate the tabletop forces I haven't decided quite yet, but these are the options I'm considering:


Regardless, I have some painting to do to field a full battalion of infantry of nine platoons for the US and Germans (We can quibble that some battalions should have 12 platoons depending on the year of the war) with three figs per stand. I'd prefer four, mind you, but I have no desire to paint as many figures as I'd need. As it stands, the US needs two or three figures and the Germans require four for 3-figure stands.

Some nice to haves:


And, since I mentioned him, here's a grainy pic of Godzilla: 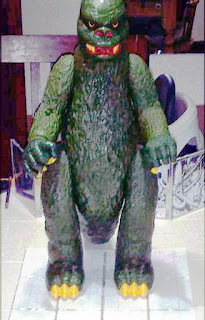