An adventure in the Abyss - Deluxe Tunnels & Trolls 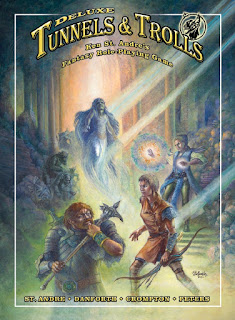 Abyss is a solitaire module for dead T&T characters by Paul Creelman, included in the Deluxe Tunnels & Trolls rulebook. It's a chance to work your way back from the underworld, with the stipulation that you only can try this once per PC.

Fortunately (?), I have quite a pile of dead characters to work with, although most have 0 adds and poor Constitution. I shuffled the stack and decided to revisit Karak the Stout and Beautiful Attractive (attributes are what they were immediately before death).

To his surprise, Karak found himself standing before a large leonid god-type thing, offering a way back to life itself. Also surprising was the short sword in his hand, considering he had never owned one before.

His first lucky break came when he found a charmed pebble capable of poisoning any weapon or make a poison liquid if plopped into water. I should add that the phrase "first lucky break" is misleading.

Further along, our hero came upon a sultry woman. With practiced ease, she beckoned Karak to join her in mind-bending bliss. But Karak, blessed with wits (IQ of 14), suspected something untoward was planned for him if he conceeded. Not wishing to fight what might turn out to be a demon or worse, he stepped backwards.

And promptly fell as if from a great height.

His fall was abruptly stopped (thanks to a successful level 1 luck saving roll, 1LR if I understand the T&T convention). However, any relief he felt was quickly dispelled  - he was caught in the talon of a large black raven.

Instinctively, he swung his sword at the great bird, but pathetic was the damage he inflicted (spite damage only). He resigned himself to certain death at the hand, or talon as it were, of the raven.

Not until he was dropped into the bird's nest did her breathe easy.

Perhaps it mistook him for its own chick?

Relief turned to dread; three nestlings already there were clearly under the impression that Karak was dinner.

And they killed him.

The way out of the Abyss closed on Karak forever.

Playing time was fairly short - but I didn't have a lot of time anyway, so I was OK with that. A character with more adds and with more CON would have lasted longer, as would one with higher STR and DEX, so they could wield a more damaging sword.

The concept is a fun one, and there is plenty of randomness even within an encounter. Playing other characters through this may not have the same results, even when I make the same choices.

And I will undoubtedly run other dead characters in the Abyss.

There are some interesting mechanics for sorcery and there is a multiplier based on the number of combat adds you have that represents the Abyss's desire to keep you - with 0 combat adds, the multiplier is 1, and of no consequence.

The one issue I had was that it wasn't clear to me whether or not I had armor. It isn't stated either way that I could find. I may have read the introduction too quickly.

What is stated is that I'm armed with the largest sword or dagger I can wield (which is why Karak was surprised by that). In the event, I decided to use a strict reading of the text; if it wasn't stated, then I didn't have it. In this way I avoided having an advantage I shouldn't, but I'd be curious if others were of the same mind.

Now you may be asking yourself, "Self, why didn't he use the poison?"

Honestly, I wasn't sure of the game mechanics for poison, and I didn't feel like reading that section of the rules in depth - my quick skimming was unhelpful.  Also, coming from DnD where poison use on weapons (as opposed to traps), at least in 1e, is strongly discouraged (and if used, then players should expect NPCs and monsters to use it too), it didn't seem right to poison my blade.

That said, I'll be reading the poison rules closely, and next time I encounter it, my decision will be a role-playing one, not an issue of rules knowledge (or lack thereof).