As DragonCon approached*, I was reminded that I had come across a copy of De Profundis: Cthulhu Gaming on the Edge of Madness in the dealer's hall one year, but passed on it, as I knew the PDF was available from DriveThruRPG for a good bit less. Like so many PDF purchases, it went into the vast pile of bits and bytes to be forgotten.

The other day, I finally put it on my e-reader and gave it a read. 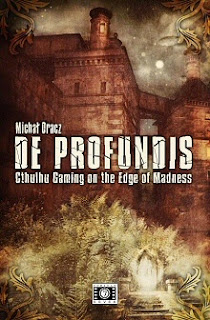 For those who are unfamiliar with it, De Profundis is a:

". . . game of psychological horror . . . De Profundis is a correspondence-based story-telling game that can be played from the point of view of participants from a variety of eras . . . Utilising a mix of letter writing, email and text based gaming - depending on your chosen era of play - it's a perfect game for the modern time strapped gamer."

Better, one of the selling points, as I saw it, is that it can allegedly be played solitaire. As readers may recall, this is my kryptonite.

I say "allegedly" because now that I have read it, I am honestly not sure I understand how to play it.

It is, as the author(s) reminds us continually, psycho-drama, and not a traditional role-playing game. For example, there is no GM, there are few if any rules, and it takes place in letters.  True, there are some rules, some tables, dice even get involved - although I will need to read this a 2nd time to make sure I'm right about any of that.

In many ways, it seems to me more of a parlor game of "let's pretend" or telling ghost stories, without the parlor and involving letter writing. For some reason, I imagine haughty rich people sitting in a circle in suits and evening gowns while bedecked in jewels saying "My word!" and "Heavens!" as they play.

That last bit is probably just me though.

Much of the book stresses atmosphere and immersion. In fact, most of the book is written as letters to the reader - which I suppose illustrates how one might play, but I found it distracting: tell me what to do! (wow, I sound like a perfect cog, don't I?) To make immersion easier, to prevent the breaking of illusion, players are encouraged to play themselves, in the real world, but to look for the weird in the ordinary and fill their letters with these mysteries (this wonderfully blurs the lines between reality and "the fiction" to the point that you might end up a raving believer in conspiracy theories. Better get out that tinfoil hat before playing). If playing another personality in a different time period, the book suggests ways of keying the envelope so the recipient can achieve the proper mindset before opening.

So, it sounds like it could be cool, but not very game-like, more like an exercise in creativity and imagination. That's not to dismiss De Profundis  -  I want very much to try it as I love letter writing- but I'm going to need to read it again and then figure out how to go about it.

*the night before DragonCon, I broke my foot and alas I did not get to attend this year.