Victory conditions:
Defender wins if holds for 10 + 1d6 turns and prevents attacker from breaking through, Attacker wins if gets 2/3 of force over bridge and at least 2 units are within 2 grid spaces of defender baseline. Either side loses automatically if they reach their army breakpoint and fail a check against it.


Without sufficient time to adjust his battle plans, Baudrillard was forced stick to his decision to deploy 3e Compagnie to the field works while sending half of his remaining force to delay the Riesling advance, keeping the rest to defend against the possibility of their breaking through, and finally 1 company in reserve to deploy where needed. The steam walker is to be held back for use against any attacking force that manages to maneuver past the field works.

Dietrich will send his strong left flank to cross the river and attack the field works, while his right and center combine to force their way across the bridge. His lizard folk units are assigned to find a ford where the rest of the troops on the left could cross. A single company is to be held in reserve and the steam tractor will be held back to cross the bridge once a path is cleared.

Riesling left and center advance - but no ford has yet been found!

Two lizard units move towards each other only vaguely aware of the other's presence (Due to the weather, LOS is limited to adjacent squares).

At the bridge, a slogging match unfolds! 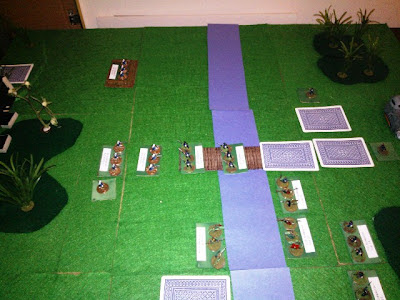 On turn 10, after failing to find any fords, and the bulk of the human forces  at or over the bridge  I use Mythic to check and see if Dietrich changes his orders for the lizard folk and get an exceptional yes - he orders them to cross the river and engage the nearest enemies.

The Riesling forces push across bridge and through the river!

The same turn, I realize that Baudrillard could conceivably win if he can hold out for however many turns might remain and keep Riesling at bay. It seems to me, now is the time to bring up the baseline units, particularly the walker which is highly mobile artillery. I ask Mythic, "Does Baudrillard send up his baseline units?" and get  yes.

Sauvignon-Blanc units advance while others retreat to the safety of the field works. The steam walker, meanwhile, stands quiet, save for the muffled sounds of the swearing of the crew members inside as predictably, it fails to start.

After much kicking and banging, the Sauvignon-Blanc walker advances to fire upon a Riesling lizard-folk unit, to no effect. Baudrillard utters a not so silent curse upon the manufacturer.

The Riesling steam tractor advances to take on the walker in a battle of technology as the Sauvignon-Blanc reserves arrive. 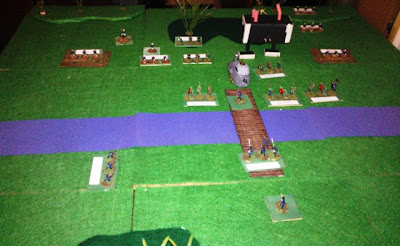 The tractor advances, spins and fires it's rear facing cannon at the walker at near point-blank range I'm starting to wonder why I bother to field vehicles for either side. Maybe both sides need to bring on new crew members.


At the end of turn 13 Sauvignon-Blanc is down 40%+. They win initiative on turn 14 but fail their break point test. They retreat in disorder.