Another Page from Featherstone : The Riesling Order of Battle on Helvetica

In the first Battle for Helvetica (see the Campaigns link at the top of the blog), I had a very fluid roster of who was in charge of what.

The chart was created in LibreOffice Writer, using the drawing tools. The lines appear somewhat jagged in the picture, but are not that way in the document - a result likely due to the process of converting it into an image. It took some 2  hours to create the chart itself, with most of the time figuring out how to fit it all on one .page, and another hour or so to pick all of the names. Only a small handful were identified in the previous campaign.

The names are a taken from German and Austrian (and I think one Bavarian) philosophers, scientists, mathematicians,  composers, political theorists and anarchists.

For the organization generally speaking, I relied on the rather broad strokes painted in Soldier's Companion and some research conducted online before the start of the original campaign. If I recall, there was no Regiment No. 129 in the Prussian army of the late 19th century which is why I chose it (certainly there was no Helvetica Regiment!). As this is an Imagi-nation, I'm not going to get too worked up about how accurate I am, in any case.

You will notice (if you click the image to enlarge it and then squint a bit) that Heidegger is actually a Lt. Colonel but is referred to as Colonel. He is in fact, the Lt. Col of Regiment No. 129, but is in charge of the combined forces on the island and is thus has the responsibilities of a Colonel. 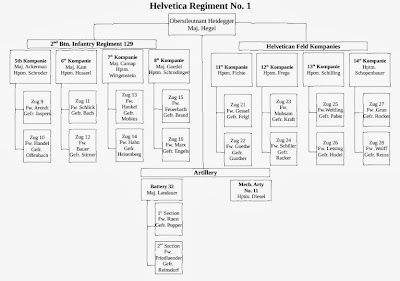 I hesitated filling in all of the names in advance but figured it would save me time later.

The only corporals (Gefreiter) not identified are those of the Helvetican Feld Kompanies. This is because this is a position held by a native lizard warrior loyal to Riesling and their names are somewhat convoluted when translated to English from their native tongue. They are often quite gruesome as well (you may recall the Sauvignon-Blanc lizard scout, "he who eats the eyes of his enemy").

I do wonder if I shouldn't make a separate blog for Helvetica and any related campaigns but I'm not sold on that idea yet.