We now resume our regularly scheduled post in this series. For those hoping for some kind of wargaming content, fear not. Painting and playing are happening and I'll post some soon.

It won't be long before you'll start to want a system to fill in the blanks about the world for you, to turn more of the game master role over to a system.


Often the kind of info we are seeking relates to detail - such as personality or appearance - but, it can also be about exact nature of the "scene", the reason for adventure, or contents of a room, for which we have no particular idea or when we feel like our ideas are stale and uninteresting.

Random Generators Are Your Friend

Random Generators allow you to answer these kind of open ended questions and for our purposes there are two types: the first gives concrete results that require little interpretation, while the other is something best described as oracular.

The first type of generator is akin to the Wandering Monster and Treasure tables in Old School fantasy games. Random dungeon generators (of which I am enamored) fall into this category as well. Your rules of choice may include many of these, the 1e DMG is chock full, as are more recent releases like Stars Without Number.


Releases like Ruins of the Under City and Scarlet Heroes present their own approaches to solo play but you can simply use their tables as part of your own toolkit.

And, of course, many such generators are available online. Among my favorites are:

Although the result may require further die rolls to determine
additional details, these do not require any particular inspiration to generate a usable, game-able result.

In addition to numbered lists to roll on, there are cards and dice that produce specific results that can be commandeered for this purpose, such as the Pathfinder item decks


Nearly every NPC generator contains descriptors of appearance, personality and motivation - Chaotic Shiny is the one I use most often because they often include anachronistic hobbies. Several companies manufacture NPC card decks.

You can embellish the results as desired with further questions posed to your toolkit or with whatever seems enjoyable for the game you are playing, but often the initial result is enough.

For an adventure start, you you might want to check out S.John Ross' Big List of RPG Plots. Either put the plots on index cards (or print and cut up) and draw one at random, or number the list and roll. You'll need to flesh them out, but they're a good way to get your character/s going when you're at a loss for a kick-off adventure. 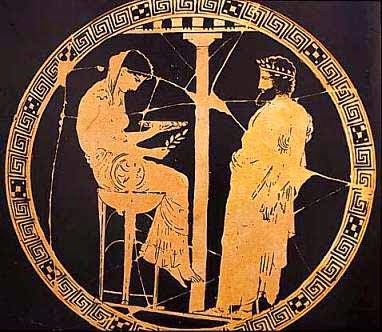 The second method, I find, is more interesting in that it does not provide a definitive result that two different players would interpret in similar ways.

What I mean is, while gold coins might bring up an image in your head different than mine, we are, more often than not, both thinking of something either of us would recognize as a gold coin.

However, if, for the contents of a chest, we drew cards from a tarot deck and the Fool card came up, it’s unlikely we will come up with even close to the same interpretation.

This is the power of the oracle result : even we are unlikely to interpret the result the same way the next time we encounter it.

Tables, dice, cards and online generators are available as oracles, and you can certainly create your own. They feature words, usually abstract concepts, but not always, or images which, if they say 1,000 words as purported, is quite a value at any price.

Mythic: GME includes two word lists, a Subject and Action list. A roll on each is combined and the player interprets the result. WilderWords and Dungeon Words are two of my favorites as they suit the kind of gaming I do often. They do have more concrete results, so I prefer to roll 2-3 times and combine the concepts into one.

Writer’s have been using similar tables at least since the 1930s (you can sometimes find these on Etsy or Ebay) for inspiration, plot, and character creation.

As mentioned, tarot cards can be drafted into service in this regard, and there are decks themed to just about everything so you can find one that works best for you. Similarly, many illustrated playing card decks can fulfill this role. Search Etsy.com for a treasure trove of both.

Other divination tools like runes or the I-Ching might work for you as well, as long as the results inspire your brain to make sense out of the result.

Finally, there is, of course, the much ballyhooed Rory's Cubes

. If they are not the most popular tool among solo gamers after Mythic: GME, then they are certainly in the top 3.


Rory's cubes are dice with simple, bold icons on them, sold in packs of 9, with several 3-dice per pack supplements. The icons are clear, and often, not at all obviously related to what you're doing. That said, they push you to think outside of your comfort zone and to come up with interesting bits for your games. They are conveniently available as an app as well for those who prefer that.

The RPGSolo website has their own set of story cubes available for free - just click on the button marked MAG (for Mark's Adventure Glyphs). These are created specifically for role playing. In fact, the whole site is dedicated to solo roleplaying, incorporating many of the tools already described.


Tip: Mythic suggests something like 10 seconds to figure out what the Subject - Action words mean, and then roll again or just pick something. I find 3 seconds is about my limit before I roll again. Don't get hung up on making the oracle result work. If it's not instantaneous or nearly so, roll/draw again. We want inspiration here, not perspiration.

In the next post, we'll look at some of these in action.

Email ThisBlogThis!Share to TwitterShare to FacebookShare to Pinterest
Labels: How to Play an RPG Solo, solitaire, solo rpg