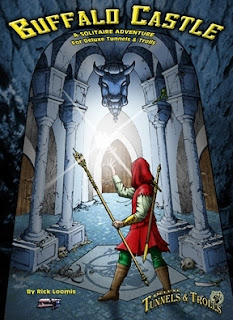 First, there was Edgar the Sickly and of the questionable career choice. 5'8 and a whopping 95 lbs, his general weakness (str 6, con of 11 however) and high IQ (15) lead to years studying, then writing copious amounts of poetry (talent: poet). What his parents, nor anyone else expected was the author of the renowned, Ode to a Handsome Milk Maid I Spied Not Creepily, and the epic, I Sing of Salt Marsh, to take up questing.

He should have stuck to poetry: killed by a troll not moments after entering the castle

Then came Gorn the Dim Stonecutter, aka "Slim Speedy," Gorn was blessed with muscle and quickness (str 13, spd 14) but the intelligence of a walnut (iq 4). No one was surprised when the 6'7 160lb stonecutter gave up the daily grind for a life of adventure.

Oddly, he was killed in the castle by sea creatures - two giant jelly-fish dropped on him, causing significant damage, and then later an octopus of unusual size bludgeoned him to death with its tentacles.

Finally, there came Joe Average. He lacked everything, but mostly creativity in choosing a name, descriptive of his abilities as it was. He had no talents, he couldn't be bothered. He adventured because it was something to do.

He was crushed beneath the pounding hooves of buffalo on a vast and grassy plain deep within the castle that bears their name.

I did roll up another character, but that one came in at level two, thanks to a Dex of 23 and the adventure is for level 1 warriors. The 13 combat adds total he had would have been nice, but I didn't want a cake walk either.

Having now made several trips into Buffalo Castle, I'm not so sure I'll be going back again anytime soon. The gonzo-ness is wonderfully old school, but it seems like a bit of a "killer dungeon" for a lowly level 1 warrior and I'm getting tired of rolling up characters to have them die an encounter or two into the adventure.

It's a classic, and the 1st of its kind, and it has definitely helped me get familiar with character generation, equipment, saving rolls, and combat,  so I'm glad I gave it a go, but I have a lot of other solitaire modules / adventures to try.

Email ThisBlogThis!Share to TwitterShare to FacebookShare to Pinterest
Labels: T&T, Tunnels and Trolls