You can read the setup for the following engagement in this post.

Major Carnap, valued for his expertise in linguistics as for his military mind, was the officer tasked with travelling with Zug 13 (of Carnap's own 7th Kompanie) to find the lizard shaman attempting to foment rebellion in the northern tribes, formerly in allegiance to Sauvignon-Blanc.

They approached the first village from the south, along a "road" (not much more than a wide cart path, here and there "paved" with flat stones) constructed in an attempt to increase trade with the tribes by the Sauvignon-Blanc government, . 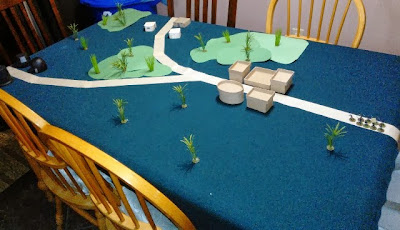 The police force entered the village and encountered much apathy, but no hostility nor sign of the shaman. 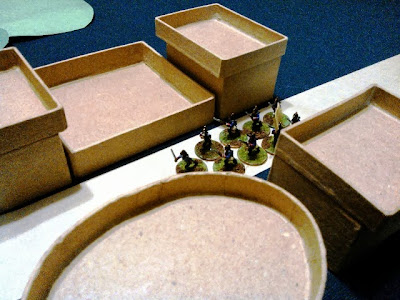 Choosing to avoid, for now, a point between the dense jungle to his North East and the village just beyond, Carnap led his men down the westward fork of the road. Unfortunately, this was another prime ambush location and in fact, it turned out to be just that. 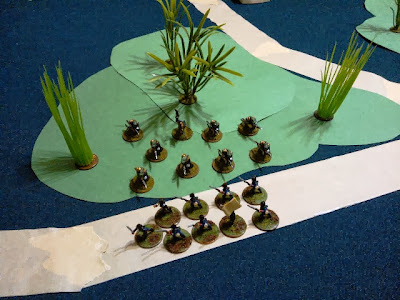 A fierce battle ensued, but the well trained Riesling force repelled the attackers.

Carnap noted Feldwebel Hankel's fine accounting of himself in bringing down several of the lizard folk handily. Their numbers reduced, the attackers faded back into the dark shadows of the thick and twisted jungle.

The village to the North West proved to be unfruitful as the first. Rather than return by the road to proceed to the North East village, Carnap led his men across the brush and marsh. As they approached the third and final village, and the likely hiding place of the shaman, the platoon formed line.

This was to be of little help as the ambushing force which had earlier fled, had not done so in fear, but in an effort to regain surprise. 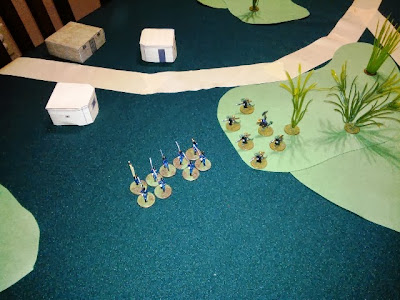 Again the battle was hard fought, and this time, Carnap's patrol was forced to fall back in disorder.

However, his skill as a commander allowed him to rally his troops, advance and reform into a firing line before the lizards knew what hit them, literally. The lizard folk were shot to pieces before the few survivors disappeared again. To the surprise of all concerned, the third village was not the hiding place of the shaman. Somewhat confounded, the march back to the fort was ordered. 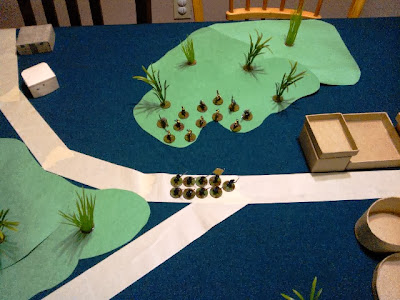 Whether through the rush and excitement of battle or inability, their arrows were of no consequence and soon Carnap's men pushed the ambushers back.

The shaman present, they continued to press on after the tribesmen. Although the platoon suffered some loss (12.5% of the platoon), they routed the lizard shaman and his surviving warriors. 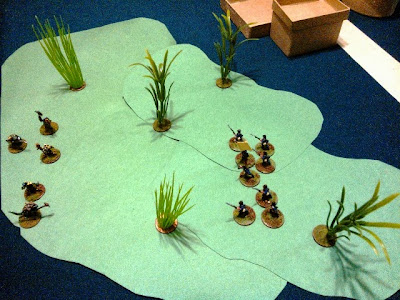 Because they failed to kill or capture the shaman, this counts as but a minor victory for Riesling. It remains to be told whether or not the shaman can rebuild his force and whether or not his message of revolt will spread among the northern tribes.

In the meantime, Colonel Heidegger (promoted after the final battle against Sauvignon-Blanc and the loss of Colonel Dietrech), back in his HQ at Gutenberg (see map), has received word from Major Kant, of 6th Kompanie, now stationed at the fort at Port Guillaume Le Roy, that some ranchers and farmers in the fertile grounds West of the city have been organizing resistance to Riesling's control of the island.

On top of this, the southern tribes, loyal to Riesling, have been clamoring for control of additional land to the north, at the expense of the northern tribes already there.

Heidegger has his hands full.

***
For those wanting mechanics to appear in the narrative, I will post a follow up on what worked and what didn't. - JY