Saturday night, I broke out the Deluxe T&T rulebook for the second time, grabbed my freshly minted copy of the classic Buffalo Castle and prepared to roll up a new character. This is a solitaire adventure for a single low-level warrior, so Type (equivalent to DnD class) was predetermined. 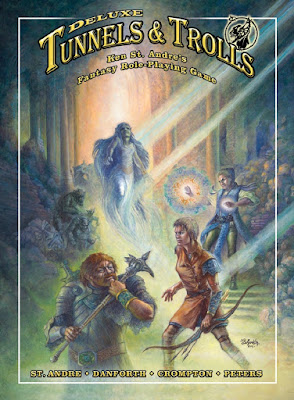 For those familiar with earlier editions of T&T, char gen is pretty much the same as always. There is a starting talent thing that I don't recall seeing in 5th edition, but basically no surprises.

During the kick starter for Deluxe T&T, i purchased a factory sealed 5th edition boxed set, complete with dice with a troll face in place of the 1. The inaugural game with this system seemed like the right time to bring out those dice. The clatter of dice and the scratching of pencil on paper and:

First (that I said 'first' is already a bad sign) there was Thorn the Bearded, a viking type who rolled an abysmal Luck of 6, and a Constitution(which functions as Hit Points in T&T) of 8. Still, his other stats were good enough that he had 5 combat adds, and I hoped to get some decent armor, a shield and maybe a sword or some such.

Like DnD (at least the editions I'm familiar with), you roll 3d6 * 10 for starting gold.  I rolled a six. SMH. With 60 gp starting money it was not meant to be.

Thorn fell into a pit almost immediately, in true old school fashion. While searching for a secret door, he was set upon by a giant jellyfish dripping deadly sliminess from above. As he wore no helmet, he was defenseless, and with his low constitution and the damage from the preceding fall, he was dead.

But fret not, for then came Karak, the Stout and Beautiful (Constitution of 29 and Charisma of 27. I rolled 18s for both! In  T&T, when you roll 18 you get to roll again and add it to the total ) His luck was better too, double Thorn's. Clearly, here was a hero.

Having learned from my mistakes Karak was equipped with a skull cap, and due to more bountiful coin (110 starting gp), he was better equipped all around.

Karak's first encounter was with a frighteningly large and aggressive octopus. Early successes against the first two of the eight arms eventually involved kept the fight within a reasonable chance of success and when all was said and done, the cephalopod was vanquished (for 80 Adventure Points).

Flushed with excitement, I eagerly scanned the paragraph for the details of its treasure. A die roll later, and alas, the creature had a meager treasure of but 10 gold.

Despite the ease by which he could have exited, Karak went further into the castle (the rules state that a character may only enter Buffalo Castle one time. So, if he left, he would be done with the adventure). At times he wandered through halls becoming hopelessly turned around (I really should have kept better track of where I had been).

A wandering orc challenged him but was cut down with ease, and yielded a bag full of silver. In spite of his successes, our hero thought better than to try his luck with a gambling wizard. For his caution, the wizard cursed him with ugliness (halved his charisma, but still, at 14, Karak was at least Stout and Attractive, if not Beautiful) and called him chicken.

A stampede of buffalo was both a strange sight and a long encounter that left him more or less intact and with some valuable hides (5 g.p. each) to sell back in town. And again, Karak pressed on, sure that more treasure awaited.

Then, upon boldly entering one more room, an ogre bashed him senseless.

[In T&T doubles mean you can roll and add to the results to the previous roll and in one round of combat, the ogre rolled 51 points. A near miracle occurred as I rolled successive doubles myself, but my total was only 32. My armor absorbed 6 points - thanks to my warrior ability to wring every last bit of protection from it, leaving 13 to remove from my CON. Which, unfortunately was all I had left at that point.]

*****
I spent a lot of time flipping through the rule book looking up this and that, but the adventure was fun, and frustrating in that i-want-to-play-it-again-and-do-better kind of way. I'll be rolling up another character soon and giving it another go.

Email ThisBlogThis!Share to TwitterShare to FacebookShare to Pinterest
Labels: T&T, Tunnels and Trolls