Admit it, you didn't think I'd get this post on Monday. OK, OK, depending on where you live, I didn't make it but it's still Monday where I live. as I write this. I'm counting it.

When we last left our hero, he was getting nowhere fast with a village lass, and so he had decided to return to the old man in the tavern for more info. You might choose to play these things out in more or less detail, depending on the experience you want to have. Since we're still in scene 2 of the Five Scene Model, I wanted to advance things along a little bit.

I am using the same 1d6 system for Yes/No questions:

But I'll be using some oracles as well to illustrate how I might use them.

Lugar heads to tavern, is the old man still there?

Since he's a village elder,  I immediately imagine people come to see him with problems and such and figure the 2 means he’s busy. For some unknown reason, I see him as being irritated that Lugar is back so soon.

My notes:
2 - yes but he’s busy and seems irritated that Lugar is back.

Lugar isn’t keen on being the cold shoulder and demands the old man meet with him if he wants his village protected.

This seems like an Ego vs Ego check but I also noted in my file, what kind of game is this old man playing?

I'm suspicious, and while it might be nothing, this will serve as a reminder that there's something about this old guy that might bear investigating.

As for the Ego contest, Lugar has a d6 for Ego, but what about the old man?

Well, he’s an old man, and perhaps reflecting my hope that I will be an old man someday (I doubt I'll give out quests but you never know), i’ll just assume that makes him wiser than most. Conversely, he is probably not as strong as a younger man, meaning the d10 is not going to be in Action but it might be in Wits or Ego.

I have no reason to roll my d6, i can't beat that.

Lugar waits for the old man to finish with whatever was keeping him and he finally meets with Lugar to answer his questions.

What does the old man tell Lugar?

For my first oracle, I decided I'd start with a tarot deck. Not having one handy, I went online and drew three cards for the old man's store:  Page of Wands, Justice, 8 of pentacles

In my notes, I record the story the old man tells Lugar, which I generated based on the three images:

The bandit prince was a village son - he was accused of stealing a small sum from a traveling merchant. He claimed it was a demon that had come from an old abandoned well, but no one believed him. He ran away, swearing vengence on us. Over time he raised an army of from children of the surrounding villages, trained them and himself, and turned to a life of banditry.

Lugar wants to know if there is any truth to the demon story. he asks.

1-yes and it has been our shame ever since.

Of course, I immediately want to know does the demon still haunt the village too?
my notes look like this:

Does the demon still haunt the village?
4 - no but some of the tongue wagglers suggest that it waits for an opportune moment to strike.

Lugar is satisfied with what he has found and finds himself a big tree  on the village edge to sleep in - he's short of coin and he can keep watch at night of the village goings on and maybe even catch an early arrival by the bandits.

In a 5 - room dungeon, this scene is usually some sort of resource drain. it can be a red herring but it doesn't have to be. Since i’m in the mood for some combat i’m hoping to take this scene in that direction, but i will let Rory’s cubes have the final say.

How many dice you roll is up to you, but I like 3 dice. It's rare that one of the three results won't be usable and more often, I can use at least 2. Four just seems like too many things to work in:

I get a: Scissors cutting an envelope, a punch card thingy, and sad face

I have no idea what to do with this. 3 seconds or less and I roll again: Foot, Someone looking, Someone shouting

Immediately, I decide this must mean that Lugar awakens to shouting of some villagers and they are looking for someone or something. Notice, I gave up on the first idea, and it really did little to slow me down. 3 seconds, probably less.

I include some generic phrases in my notes, to help me set the scene in the write up, and then, like a good GM,  of course send the thing heading in Lugar's direction:

“Catch him, he went that way”

Lugar could hear the sound of something crashing through the tall grass, heading in his direction.

But it's dark and I'm not sure what, if anything, Lugar can see.

is he able to see anything?

Because it’s dark,  i decide to modify the die roll with a +1, which will push the response toward a No value. The best he can hope for is a "Yes, but" which seems reasonable given the context.

I rolled a 3, which becomes a 4 with the modifier.

4 - No ,but the sound is getting closer.

Lugar steadies himself on his perch into a crouch, struggling to view whatever may be approaching and preparing to pounce regardless.

The thing nears - does it approach close enough for him to jump onto it?

1 - Yes, and it passes right beneath the limb Lugar crouches  on - he can’t make out the shape exactly but can see the darkness where its body ought to be - he hurls himself at it.

This can be a skill test unopposed, since the thing doesn't seem to know he’s there, or it could be an opposed challenge since it is moving.

I like the latter as it will tell me a bit more about what I'm dealing with:.

Fortunately, the d12 comes back with a 1, so Lugar succeeds.

I still have no idea what I've encountered, so I need a way to find out. I could use a wandering monster table, or a monster builder, but I've opted to use Zero Dice: 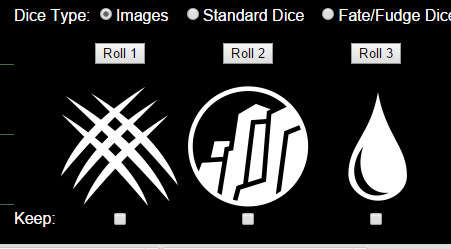 The crossed claw remind me of X-Men’s Wolverine. Perhaps its some mutant humanoid with great claws that has come down from the mountains and while I’m not sure about the droplet, I can only assume it's probably blood. Great

I type up what I'm picturing, so that later, when i do the write up, I won't forget what I had in mind:

The creature, larger than Lugar was man-like in from, but it’s face had a twisted animal like quality about it,  it’s hands seemed to end in elongated steely claws like long spikes. Lugar could see they glistened dimly with a black wetness.

1 pt of damage gers though, Lugar is down to 7

Lugar draws his sword and swings
wait, is he able to do so? yes, but it catches enough to void his attack this round

Next round: (rolling again is not the default in USR)

How many hp does it have?

If you have read any of the Ever Expanding Dungeon, you probably know I have an entire system for maintaining surprise for hit points, but I haven't introduced that here yet. For now, let’s just do it the old fashioned way.

At this point I would write the narrative up, but I'm going to stop here or I won't make my self-imposed deadline!