I originally planned to post this as post 3, but changed my mind because I wanted to give people something to play with, dice to roll, etc. So, here's a bit of my thoughts on the question of one character vs a party. Scroll down for the TL;DR in bold.

Also, I have comments to reply to on previous posts. I will do that shortly! 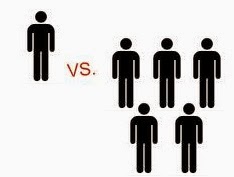 Although the phrase "solo role-playing" might imply that the player takes the role of a single character, the reality is that, in some games, this is not the recommended course - either due to the lethality of the game world to lone characters, or because characters occupy various niches and thus a lone character is ill suited to deal with the variety of common challenges they might encounter.

Both situations are typical in the more popular fantasy games as well as the more realistic, as opposed to cinematic/pulp, military games (think Band of Brothers vs. Sgt. Rock).

If you want to play a solo character, a lone wolf with no team to speak of, for genres or game systems that assume teams of PCs with specializations, then, as the player and GM, you may want to exercise your freedom to alter game play. You can do this either by reducing the level of danger/challenges encountered, focusing on the kinds of challenges that your character is best suited for, or rewrite the rules to reflect your preference.

As an example of the last, I highly recommend checking out the free supplement, Black Streams(Solo Heroes). It uses an ingenious approach to interpreting hit points. As a result, the lone character has an increased chance of success and long term survival, without the need to resort to resort to reduce the difficulty of encounters. Even if you don't play Old School Fantasy games, there is inspiration there to be had.

Without modifying the game so drastically, you can focus on the character's strengths.

If, for example, you are playing a thief in a traditional, class/level fantasy RPG, then the focus could be on committing "jobs", rather than solo looting ancient cyclopean ruins.

This kind of thing can work quite well. Understand that you may need to do some rules tweaking, depending on the game system. For example, in a system where character growth is dependent on combat, a lack of same will hamper character growth, in system terms, if your adventures revolve around intrigue.

If playing that same thief from that traditional, class/level fantasy RPG, you want to raid subterranean lairs, you might decide to scale encounters/challenges. For example, when you are 1st level, rather than the four to eight orcs you might ordinarily expect to meet if you were in a group, you limit the number to 1 or 2.

I have played many enjoyable games this way - I won't call them campaigns because the characters were short lived - and it is well worth a go to see if it works for you. Without a doubt though, some will find it unsatisfying because it doesn't feel like the game they set out to play - either because they have to tweak the rules too much to give their lone hero a chance, or because they really want to play out the exploits of a team.

If that is you, then you will take on other characters - call them NPCs if you like, but of course, they aren't, as there are no non-players in your game - and either treat all of your characters as special snowflakes, or have one main character and treat the rest as secondary.

Special snowflakes are full fledged PCs in their own right, which you the player do your best to run independently of your other characters, while I mean a secondary character as one that supports the goals of your PC, although they too should have some depth, with varying degrees of focus during game play.

In either case, you will find it helpful if these NPCs have at the least their own agendas and one or two character quirks. These you can use to provide narrative color, as well as friction for your main character, if you have one.

The extreme alternative is to treat the secondary characters as 1-dimensional props. These poor souls exist simply to fulfill their role in the group and are easily replaceable, e.g.s. torchbearer, porter, the mercenary, etc. Although, over time, you will undoubtedly find they take on personalities of their own.

Perhaps, surprisingly if you follow The Ever Expanding dungeon, this last approach is my recommendation for the beginning of your solo ventures.

TL;DR: if you are just getting started, stick to one main character. If you need sidekicks/other characters in the group in order to succeed in system terms, treat them as 1-dimensional cannon fodder who dutifully follow non-suicidal orders.

Why?
The alternative to all of this, of course, is to reconsider your choice of system.

There are rules sets that support a more Conan, less Lord of the Rings, more Batman and less Justice League adventures.

Games based on source material that regularly features a lone protagonist: superhero, samurai, vampire/werewolf protagonists, etc., or those centered on Lovecraftian horror for instance, more often readily lend themselves to the solo PC. In these genres, the basic assumptions lead to a system that very often requires no adjustment as a result; one investigator is just as likely to go insane investigating Mythos horrors as a group of them.

Email ThisBlogThis!Share to TwitterShare to FacebookShare to Pinterest
Labels: How to Play an RPG Solo, solitaire, solo rpgs