Well, I should have guessed that I wouldn't get in any gaming this past weekend.

In this case, it wasn't for a complete lack of time - not entirely at least. Rather, I fell down a world building hole while preparing for the next b/x - Labyrinth Lord session. Amazing how much time playing with Hexographer can absorb!

Speaking of Hexographer, I was concerned that I wouldn't be able to run the free version on my netbook seeing as how I'm running a distribution of Linux (SimplyMEPIS 8.0 for those curious). I am happy to report it runs just fine.

In addition, I spent hours reading various posts on populating hexes. My two go-to sites at the moment are The Welsh Piper and The Alexandrian, although I borrowed encounters liberally from Planet Algol.

Fun as all that was, I was jonesing for a wargame and I thought for sure I would get one on Monday - the Labor Day holiday. Our son's nanny wanted to work to make up some hours she had missed. When the nanny called out sick, that put a rather large crimp on those plans.

Finally, last night, after the baby went to bed, I did manage to sneak in another round of "Pacific Island Assault".

Below are some pictures from the end of the game showing different perspectives of the victory: 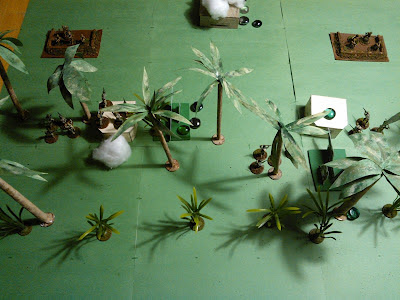 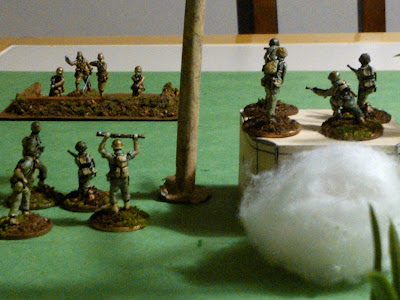 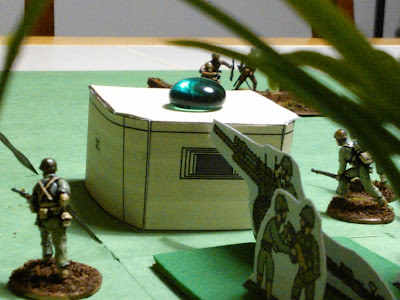 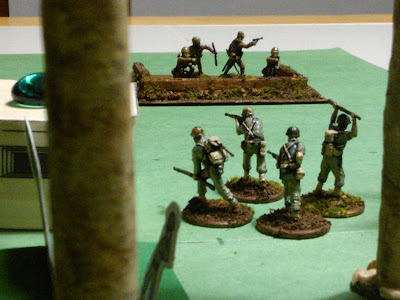 This time, I diced for whether or not a Japanese unit would move in cases where the unit was heavily damaged and falling back would give them an advantage, or when they were too far away to hit the Marines easily. I also diced to decide which target to attack if there were more than one equally close, giving preference to infantry and artillery over tanks, and damaged units over undamaged units.

These mechanisms worked well - they aren't terribly complicated so I would have been surprised if they didn't.

The game was a nail biter, with victory finally secured during the navy salvo on the last turn of the game.

It took a few days of waiting to get to the gaming table, but it was worth the wait.